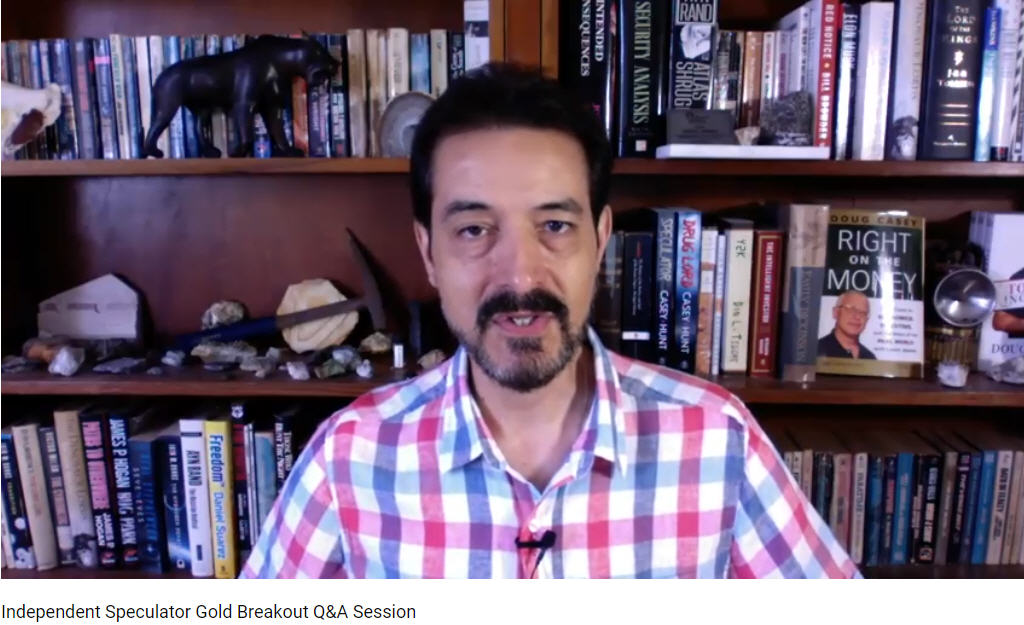 Subscribing to the Independent Speculator is naturally going to get you ALL the information Lobo has to offer to build your speculative portfolio.

Yet there is a great opportunity to profit even from free information as well, as evidenced (directly and mentioned) by today’s YouTube live Q&A on the Gold price breakout we have recently experienced.

It was mentioned that several subscribers have actually “earned” their subscription fee by profiting on free information published on the Independent Speculator site, free emails (you can subscribe on his site) and Q&A’s like today’s.

Unless you’ve been on vacation for the last few weeks you have probably noticed that Gold has finally broken out of a 5 year slump trading range and did so rather aggressively.

Other advisors like Marin Katusa have even pointed out record inflows into Gold ETF’s in his latest (free) email.

Interestingly enough, Lobo Tiggre actually has been suggesting that this very thing could happen. And while he is not one to jump up and down and scream “buy” or “sell” he certainly gets credit for doing a better job of reading the tea leaves than most.

While the primary topic of today’s live Q&A was the Gold price breakout and what it means for speculators like you and I, the “other yellow metal” came up also. President Trump does need to make a decision by July 14th on this topic and Lobo gave his take on what that decision will be.

Personally I think you should watch the whole Q&A but if you can’t or won’t, he thinks Trump will sign if only because it sounds “pro USA”. he could be right.

Yet either way he feels Uranium is well positioned for the wise speculator to profit in the relatively near future.

It’s also mentioned during today’s session the advantages that Lobo Tiggre and family enjoy by being official residents of Puerto Rico – besides the beautiful weather and scenery: ZERO tax on capital gains, both short & long for many years to come!

While Lobo is not necessarily a trader he does touch on some short term trading research he’s been doing and how nice it is not to have to worry about the tax consequences of the trades.

Since most of his income is capital gain oriented, having ZERO INCOME TAX on those gains means his income is essentially tax free!

Yeah, nice! But, you do have to actually move there – no games…

Again, the best way to profit from the extensive experience and insight of Lobo Tiggre (you might remember him as “Louis James” from Casey Research) is to actually subscribe to the Independent Speculator.

Remember, unlike the current policy at Casey, Lobo is not only invested in his recommendations personally but is 100% transparent about his trades, profits or losses.

Check out the Independent Speculator by CLICKING HERE