The #1 mistake Gold buyers make is executing the purchase without due consideration to where they will safely store their precious metals.

Take a look at those coins above. Ever wonder about the circumstances Gold coins John Q. Public finds accidentally were lost under?

Was the village overrun and all the inhabitants killed off or forced to flee so quickly as to not be able to dig up their stash? Or did the owner simply die off – perhaps suddenly – without telling anyone where to find them?

Every once in a while we see a story about a homeowner doing a remodel who finds cash in the walls or some other treasure left behind by a previous owner; maybe not even the most previous one or more owners.

Now, every one of us knows WE wouldn’t do that, right? Yet it happens. To one of US.

Dangers Of Storing Gold At Home

Many folks want to keep some Gold and Silver near to hand, and that’s fine. Maybe even in Combibars just in case barter becomes a necessity. So do you put it in a home safe? If so, how many home safes do you have? Catherine Austin Fitts recommends having 2 safes… 1 that’s sort of easy to find with minimal contents; then the REAL one that’s harder to find.

Yet I dare you… Especially in Central Texas… to find a home where you can easily hide a good safe. C’mon, prove me wrong!

So let’s look at 4 problems, yea, dangers, of storing Gold at home:

With regard to robbery, the scariest and deadliest scenario: Who knows about your Gold stored at home? Someone needs to know, but that *could* be in the form of a sealed letter in a bank safe deposit box (one of the few things that belong in a bank box, yet that could be argued too).

Gold coins are most frequently stolen by a trusted family member or friend; maybe one of them has a big mouth?

Does the Gold shop where you buy bullion know your name, where you live? Anyone ever followed you home from the coin store?

If you order online, most vendors will ship with nondescript return addresses. The thing is, if it’s a small package and is insured for thousands of dollars and requires a signature, it doesn’t take a genius to figure out what’s in there. Silver… that would be a HEAVY package insured and requiring a signature.

Cut To The Chase: Here’s What I Recommend Instead

With me, the older I get more it’s all about sleeping well at night. Tossing & turning, laying awake worrying, I couldn’t be happier if it never happened again in my life.

So my mission is to help as many people as possible protect their wealth with precious metals WITHOUT upsetting their balance of life, as in sleep and enjoyment.

As you read these two real life situations, ask yourself if either one or both hits a little too close to home for you.

The first story comes from a rather intelligent and clever individual who had read stories of thieves actually searching a house with a metal detector to try to find hidden Gold & Silver. Has any thief actually ever done that? I don’t know, but it seems like a crapshoot to me, especially since this took place back in the 1990’s when most homes still had black pipe for gas and copper pipe for water.

Yes, a trained individual can probably discern the difference with a good metal detector and enough TIME, but therein lies the rub… Most thieves do not want to hang around very long. Now, if your home is in a remote area and they know you are gone? Maybe.

Our clever individual had hidden his Gold & Silver in some unlikely places; even hollowed out a wooden support on some shelving. One idea he was particularly proud of was slipping a gold coin BEHIND the electrical outlet inside the outlet box in the wall. 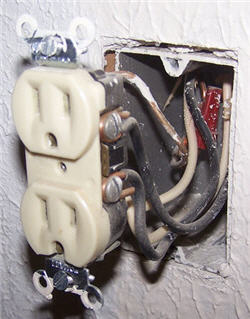 The outlet included a little brass and the wire had copper to throw off the detectors and who would think to look there, and if they did, would they check every outlet and switch in the house? Mr. Genius had one reservation, though. Gold coins conduct electricity. Sure, we can put it in a plastic sleeve, but still…

As time goes on, the Genius family moves.

Have you ever moved? You wait, wonder and worry as you have your home for sale. When will it sell? When will we move?

Then suddenly, it happens. House sells, now it’s shift into high gear time to get everything packed and ready.

Closing comes, you hand over the keys.

Fortunately, Mr. Genius stumbles upon 2 tubes of Morgan Silver dollars hidden behind some insulation in the basement rafters… Whew! That was close! How could he forget about those? He remembered the coins in the hollowed out support.

…about a month after moving

Mr. Genius bolts awake in the middle of the night.

He never retrieved any Gold coins from electrical outlets!

Yet, he’s not 100% sure he actually left them in there. He remembers trying out the idea but he’s just not SURE that he didn’t chicken out and discard the idea. HE CAN’T REMEMBER!

If only Mr. Genius had created a spreadsheet or something of all of his Gold purchases so he could know if all of his coins is accounted for…

Mr. Genius suffered for years wondering if he left any Gold in that old house; he still doesn’t know but he’s finally (mostly) at peace about situation. Now he has a log of all his coins – it will help for tax purposes when and if he ever sells any too.

This next story, unlike the previous, is still on-going unfortunately.

Mr. StayAtHome has enough Gold & Silver at home that he does not feel comfortable leaving. He lives out in the country and knows that thieves could ‘camp out’ at his house for an extended period of time if he would take his wife on a nice trip somewhere. So they don’t leave, not for long anyway.

He has spent a small fortune on alarm systems, cameras, remote monitoring service so that he can check in on the house when he is gone.

Mr. StayAtHome actually has a good problem in a way. He and his wife started buying Gold & Silver back when the prices were much lower, so what started out as a less worrisome sum of value became worrisome via appreciation. Even at $1100/ounce for Gold, that’s many times more than the $280 per ounce he paid for much of it.

I have tried to convince Mr. StayAtHome to perhaps ship off some metal to a secure storage facility or just sell some and buy equal value offshore through a service that offers vaults worldwide. That would give him geographic & jurisdictional diversification, something that I thought would be important to him since he has a severe distrust of a certain relative: one known as Uncle Sam.

1 Easy Way To Avoid All These Problems

Do you need some metal at home for emergency? Sure, that’s fine. In fact, if you are thinking potential barter, Silver is probably more appropriate anyway and it’s more expensive to store in someone else’s vault. So keep some Silver at home, maybe a Gold Combibar or two.

For the heavy lifting though?

Check our reviews on BuyAndStoreGold.com, right?

Many are trusted and secure, you have choices.

Is it expensive, you ask?

Well, yes and no.

Yes if you are looking at a private safe deposit box in Cayman, or a service like Global Gold in Switzerland.

No if you consider the peace of mind that you are buying! We have Gold stored with Global Gold and don’t lose a wink of sleep over it.

Here Is One Better…

For about 1/2 the cost of traditional (maybe stodgy) private Gold storage, The Hard Assets Alliance (HAA) gives you access to vaults in the U.S., Europe, Australia, Asia; including the incredibly popular, safe & secure Singapore.

HAA has become our go-to vendor for buying Gold & Silver and storing it with jurisdictional diversification. Service is superb and recently just got better.

Even for the Gold and Silver you choose to store at home, The Hard Assets Alliance will offer you a better price than most online Gold websites. Buy the metal today and it’s your choice if you:

>>Click here to learn more about The Hard Assets Alliance<<